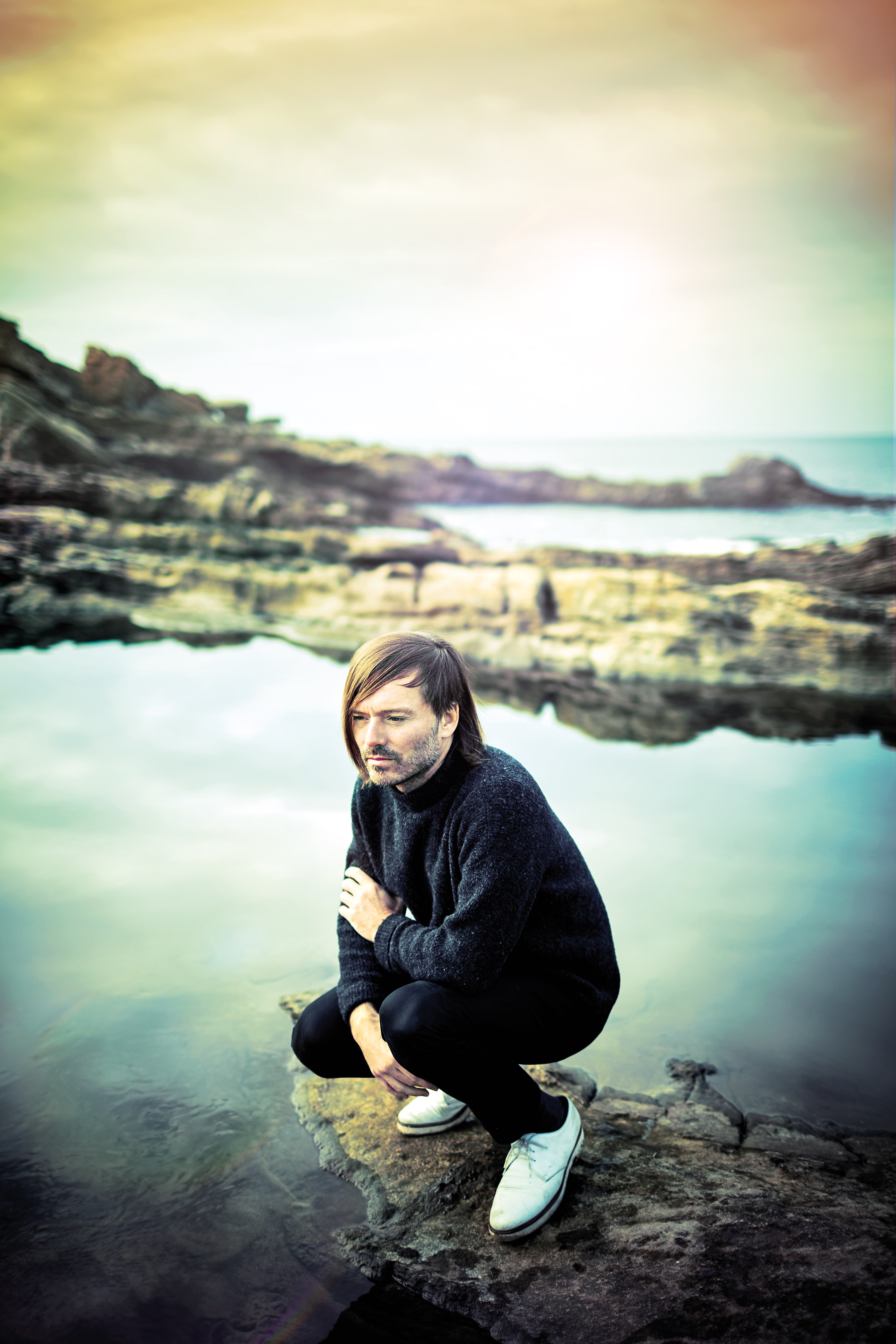 Jean-Benoît Dunckel is back in the guise of an augmented man with H+, an exceptionally futuristic and optimistic, contemporary sound odyssey. A little over ten years after his first solo album, Darkel (2006) — and following his 2013 collaboration with Lou Hayter (Tomorrow’s World) and 2015 album with Barði Jóhannsson, Starwalker — H+ sets the tone with an album cover by French design studio Akatre depicting the artist in a utopian landscape. H+ represents a positively charged hydrogen ion, known as a proton; it also the symbol of transhumanism. Indeed, after having alternated solo albums (using his Darkel alias) with Air projects, “in order,” said Jean-Benoît Dunckel, “to avoid being soluble in Air, for Air was white and Darkel is, well, dark,” he set his sights on recapturing the entirety of his being. “I use the sound experiences of Air; I just extend my Air sound in a solo setting. I don’t renounce the past, in fact I exploit it quite openly,” the artist recently explained. Though the success of Air continues unabated, with frequent tours, the duo hasn’t produced any new music in five years.

Scoring film soundtracks — Fabrice Gobert’s K.O. (2017), Olivier Babinet’s Swagger, and Alanté Kavaïté’s Summer (both from 2015) — apparently confirmed Dunckel’s exponential taste for loads of violins and improvisation in the studio. Many of his songs are based on the barest of piano melodies, and a vocal style that is smoother and freer than ever. Years of singing on tour with Air strengthened his voice; it now has a deeper range and tone, while remaining androgynous. The mixture of longevity and a love of transformation bring to mind David Bowie; and one could easily imagine the cozy sound bubbles Dunckel produces — with the ideals of “sex & space” never far from his mind — being performed three thousand years from now in a cosmic jazz version. With his favorite synthesizers, the MS20 and the Arp 2600, JB Dunckel spent a lot of time honing this album aboard his private spaceship, a way of thumbing his nose at the wave of dystopias that make mincemeat of all our hopes and dreams, by creating a future in which “romantic transhumanism” reigns, “man never ages, and love is eternal.”

H+ kicks off with the track Hold On, in which a “return of mojo” is abundantly apparent. The lyrics “Daddy’s coming home” echo through it. Dunckel finesses the kink slightly by pointing out that “when you feel a little depressed, wanting someone keeps you alive with the promise of pleasure.”

The spongy Love Machine remains in the same orbit with the declarations of an older man in love with a younger woman. This song came out of sound improvisations with digital and conceptual artist Jacques Perconte, with whom he has he has performed numerous times these past, years, memorable “Hypersoleils [Hypersuns]”. Here he sonically repeats the same theme with increasingly energy-depleted variations.

As an album H+ is a testament to Dunckel’s love of analogue sound and filters. “I wanted to explore the metamorphosis — the fact that the color of sounds changes even though the melody remains the same, to maintain spectral continuity,” says Dunckel, clearly pleased to be able to access the necessary computer hardware with his young sound engineer at Air’s own Atlas studio, situated near the Buttes Chaumont, a public park in northeastern Paris’s 19th arrondissement.

The Buttes Chaumont is a rare oasis of peace in the urban Parisian landscape, described in the tune The Garden as a natural haven necessary to survival in the city. It is a park “that creates itself musically. Like when you’re onstage you can create a bubble of strength in which no one can see you and in which you can free yourself from the music,” said JB Dunckel. And yet the album was heavily influenced by science-fiction, in particular the film Ex Machina (Alex Garland, 2015), in which very advanced robots feature prominently, and a man has created for himself humanoid robot girlfriends.

The heart of the album is the song Transhumanity, which sprang from his reading of the press, and from which he has managed to extract a positive vision of the future in which man will be saved by science. “This album predicts another system,” the artist warns us with a mysterious expression.

“Here come the new men, their life has no end,” he sings as if welcoming a new race of immortal humans who will use their time on earth profitably, to learn more and love better.

The instrumental Quartz is like a joyful Japanese-inflected pause, a stroll among the rare minerals of a perfectly balanced, harmonious planet.

Slow Down The Wind (Up) features Lou Hayter, ex New Young Pony Club singer, with whom he formed the duo Tomorrow’s World, which had already revealed that he was more interested in exploring the future than excavating the past. And yet it’s a “Beach Boys-type tune, with the same modulated theme,” he admits, discussing this spark from the future.

Now that the stage is set, he officially invites the listener, with Space Age, to join the modern era, and to participate in the “human adventure that will finish in space.” JB Dunckel deplores the “stone age mind” that still characterizes most of us, as we stubbornly remain violent and ego-obsessed.

Show Your Love is a call to better — and more frequently — express one’s love. “It’s a song to relax and to say: express yourself,” says Jean-Benoît Dunckel.

Ballad Non Sense brings the journey to an end with sounds crystallizing the entire atmosphere of the album, with vocals by Guillemette Foucard, “the sound of Twin Peaks of the future,” with its mix of analog synthesizers, digital effects and violins leaving space for solos that embody letting go and looking at the big picture.