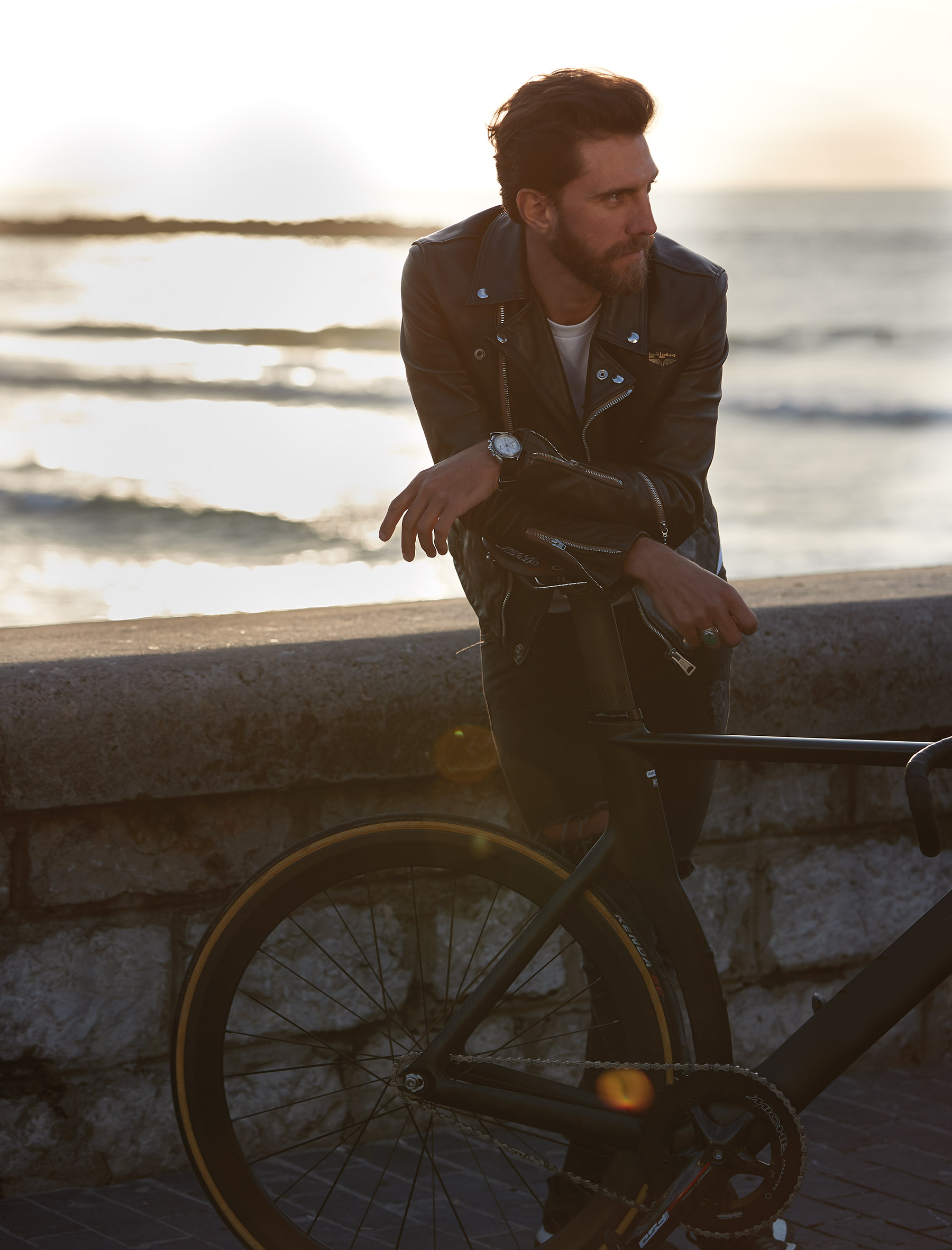 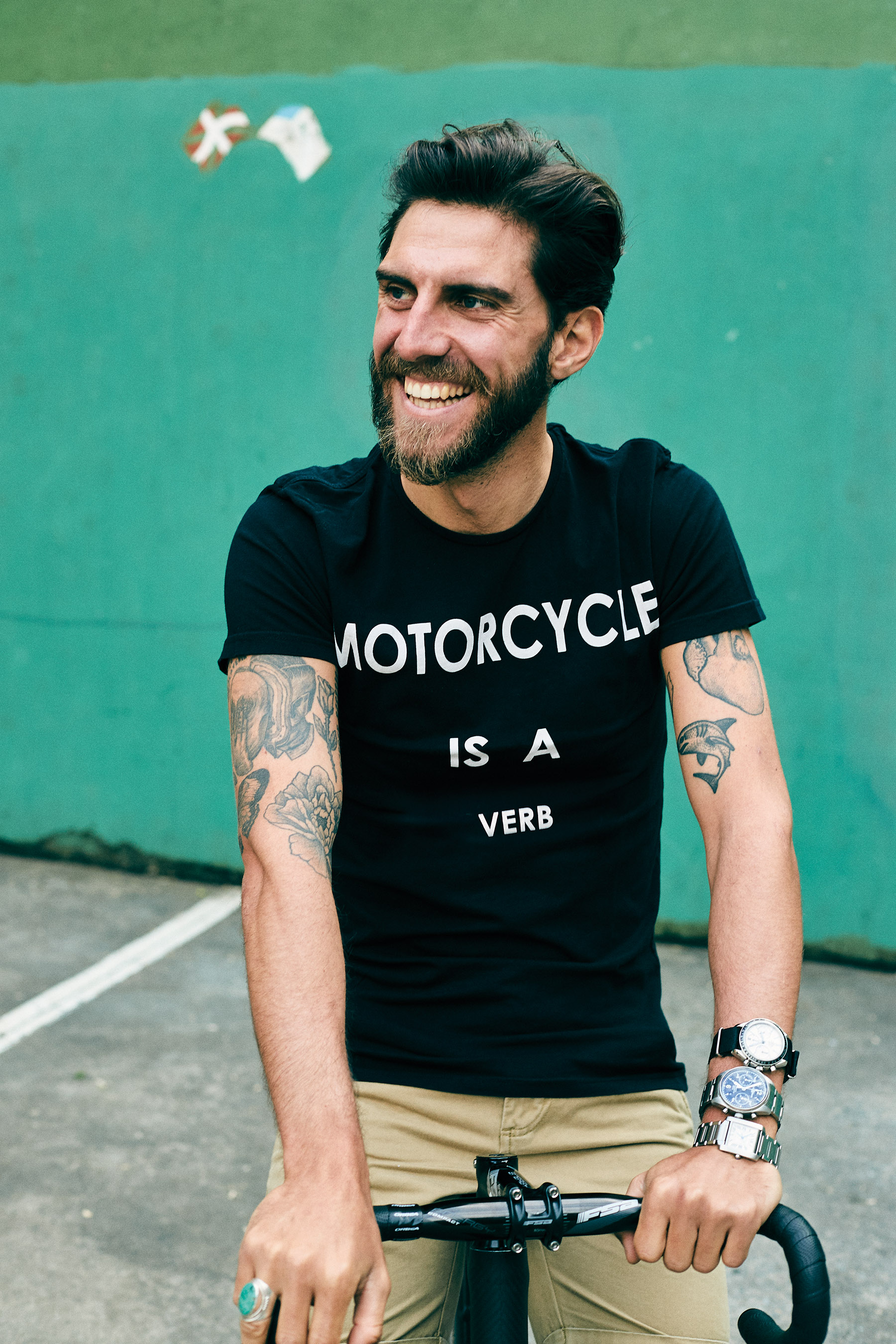 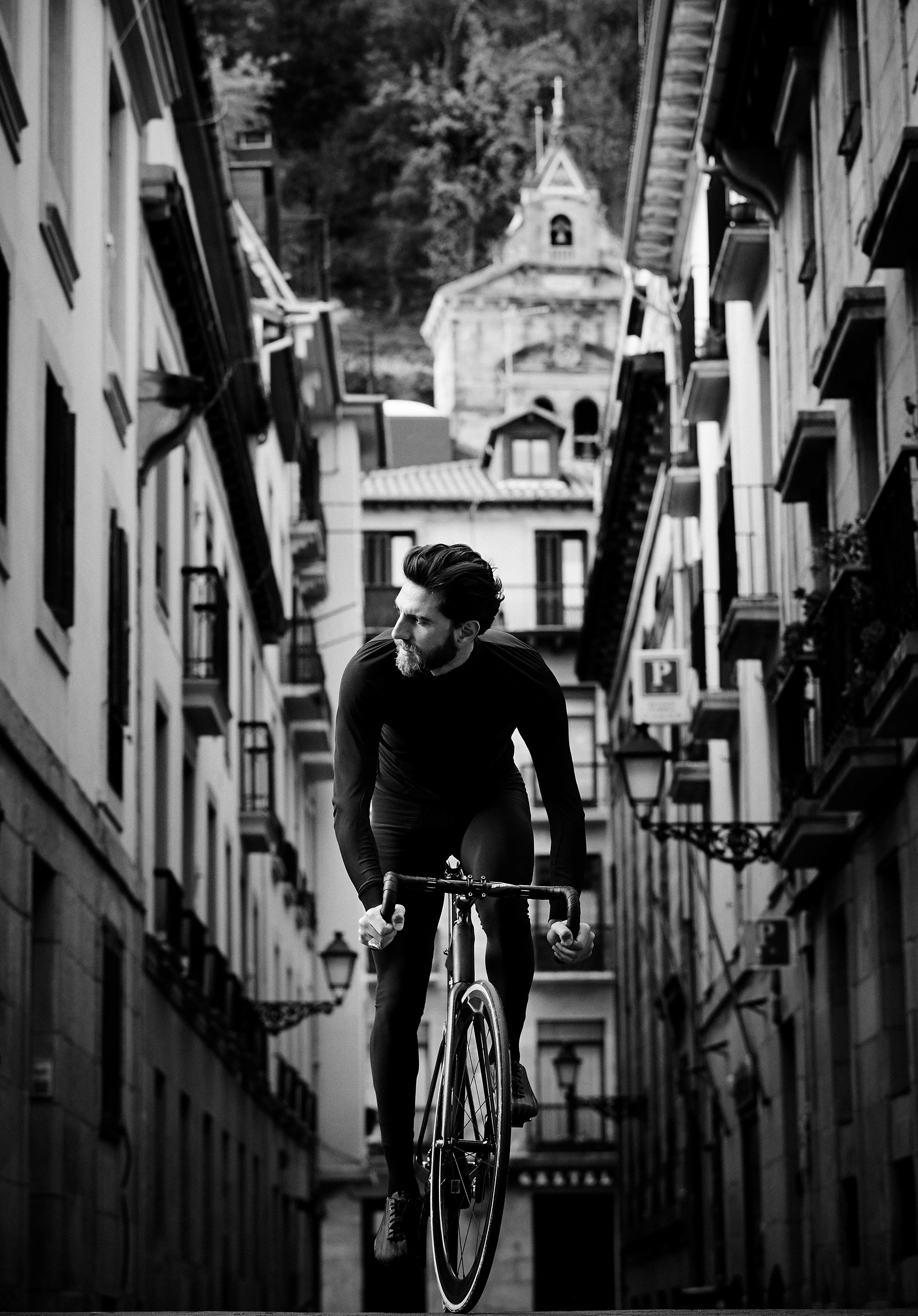 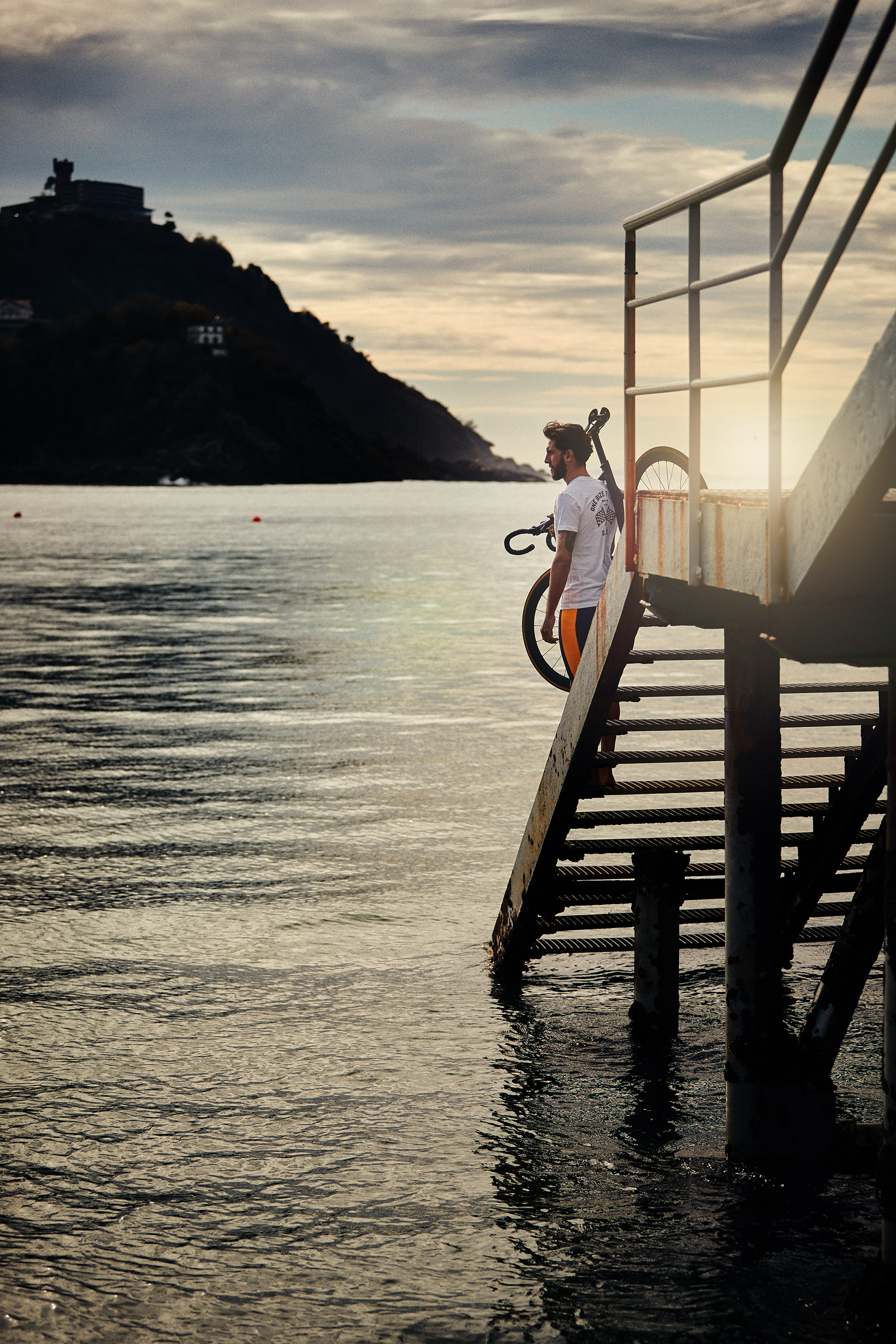 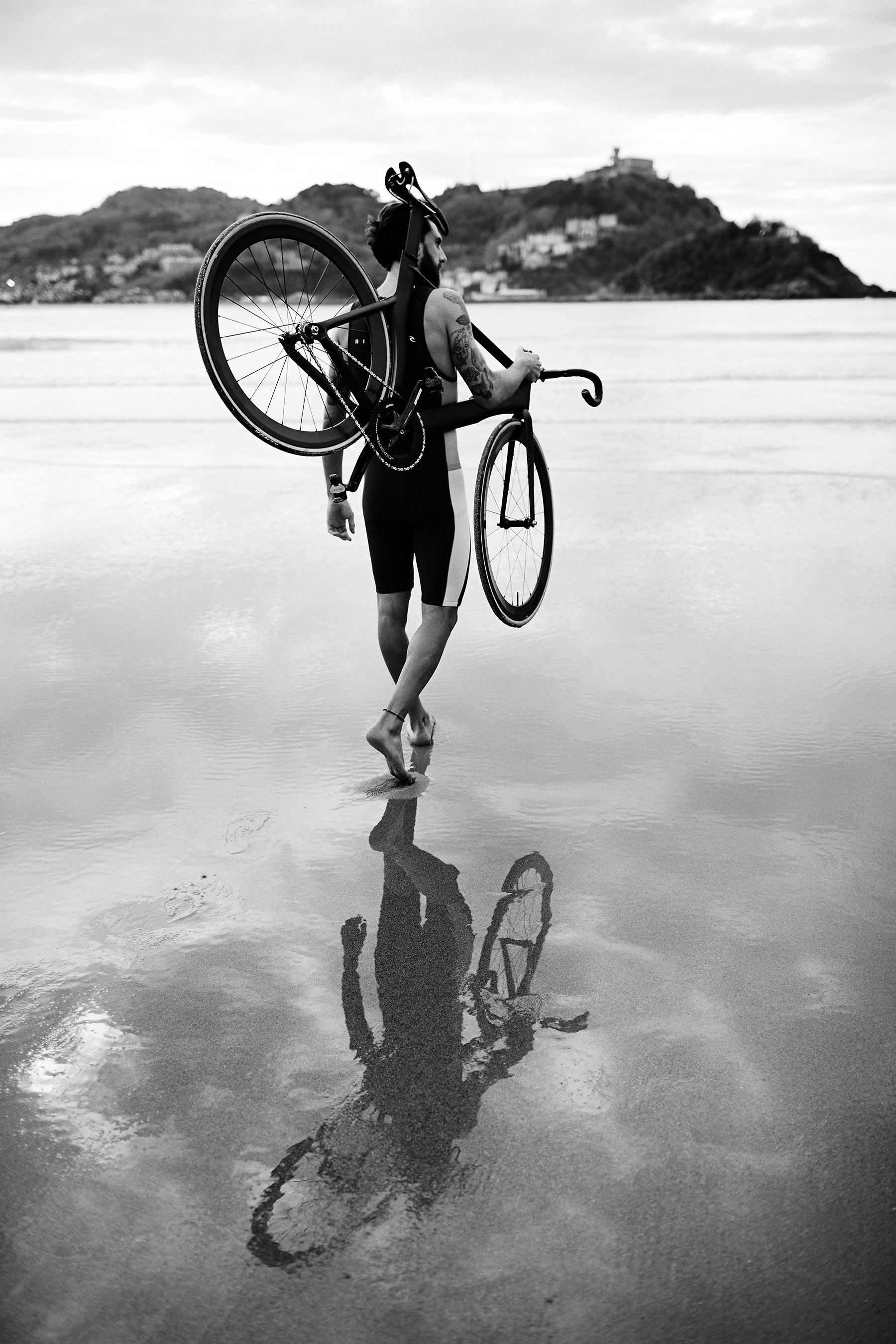 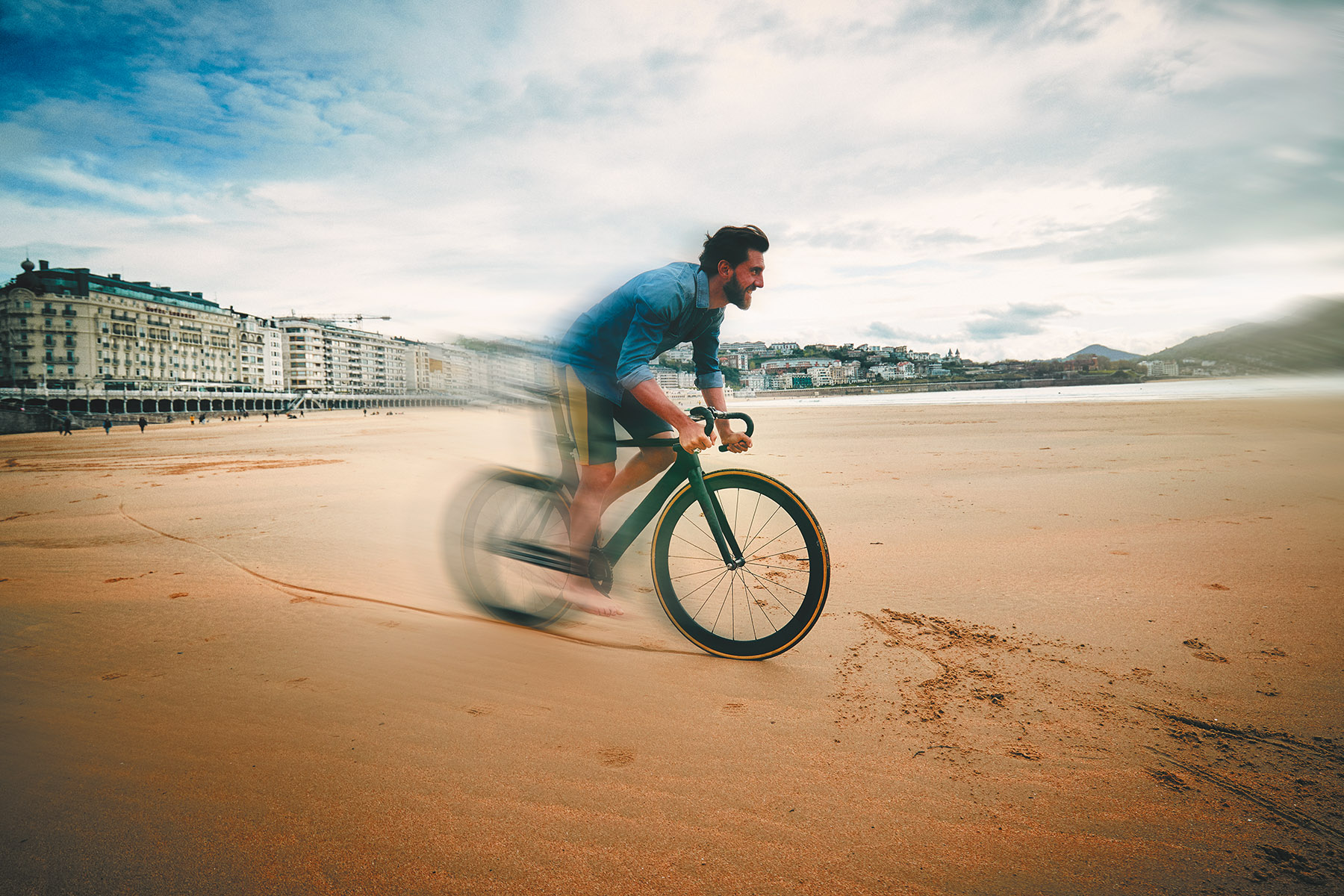 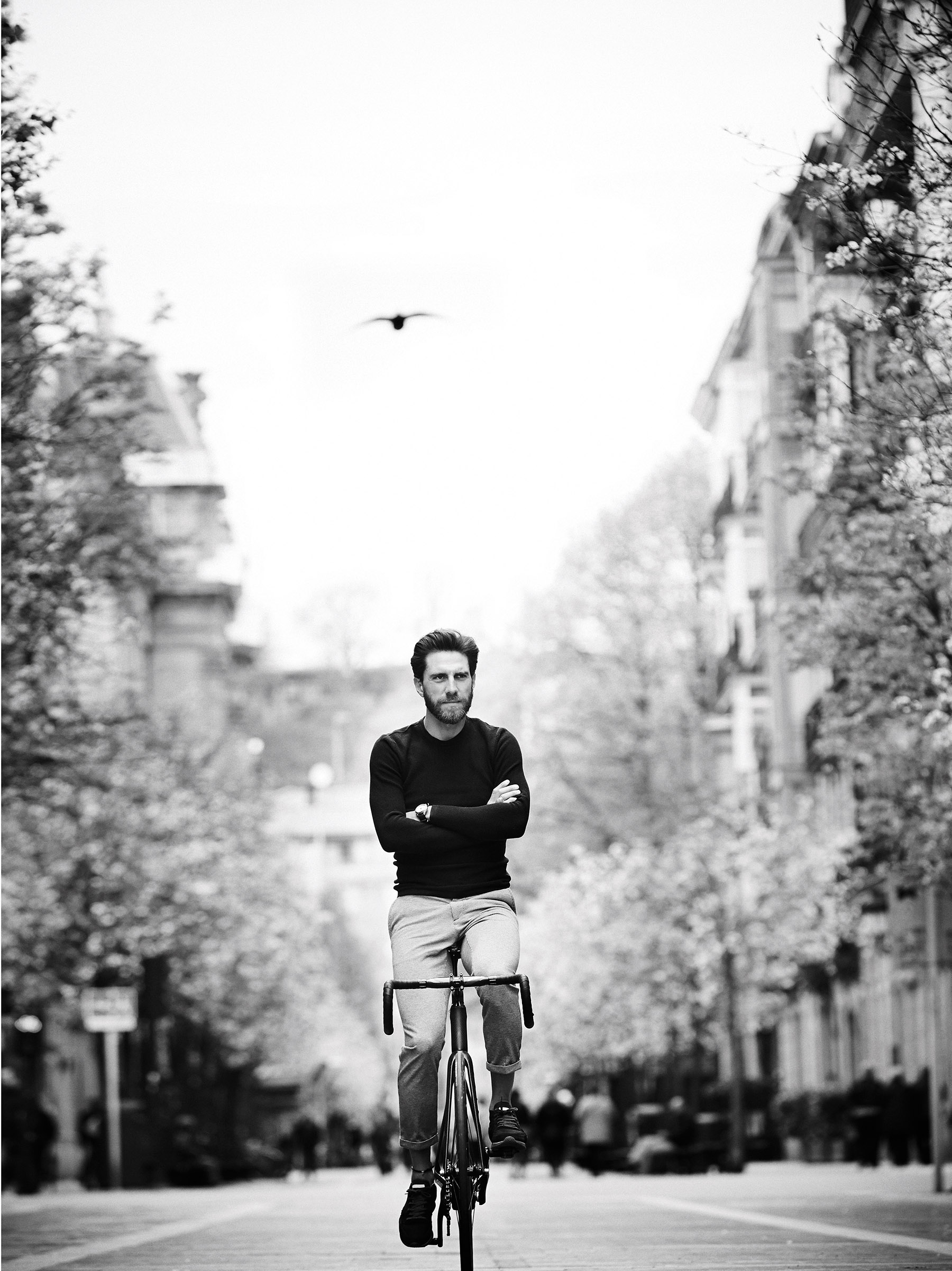 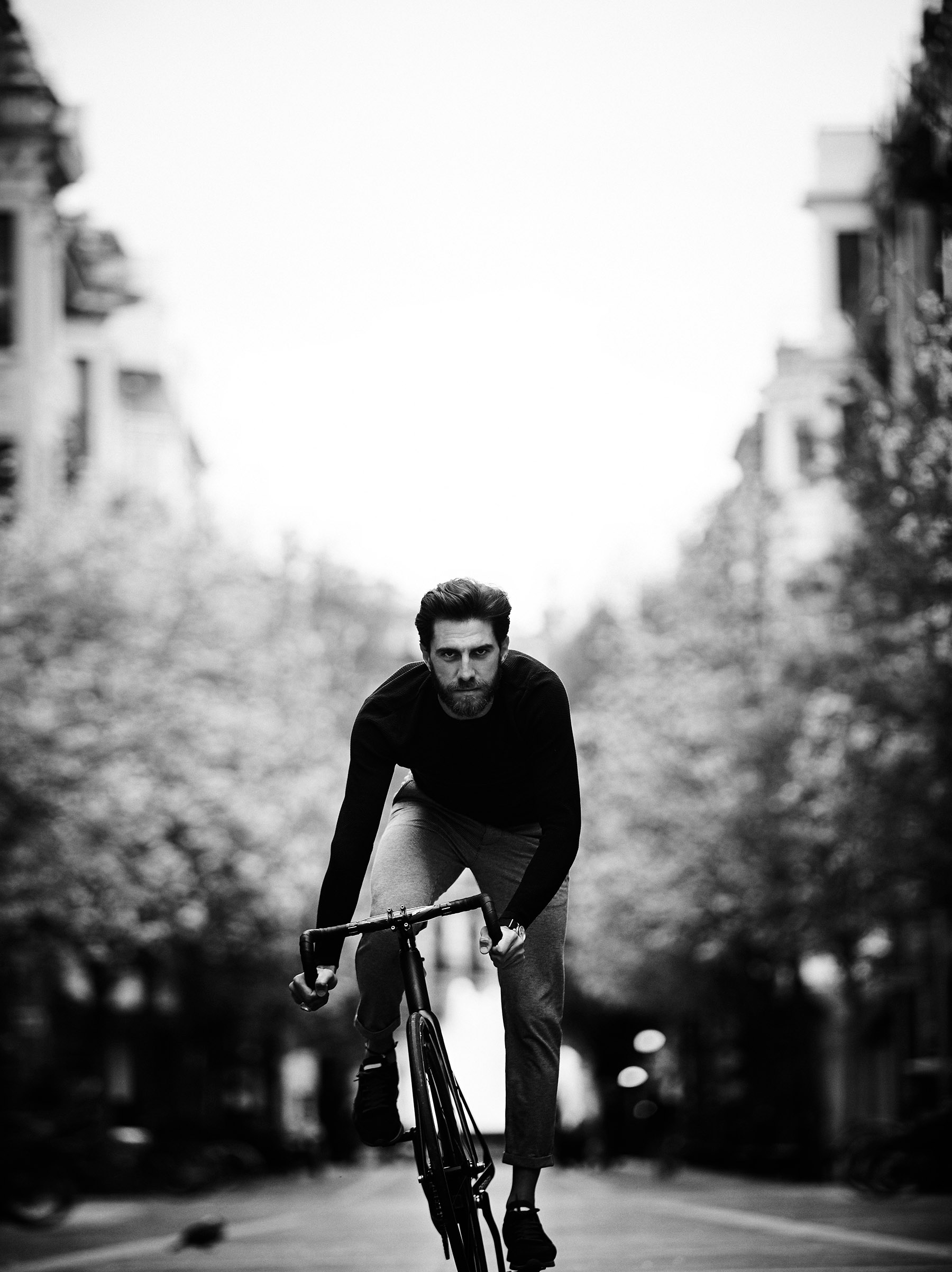 Can one be elegant while leaning on the handlebars of a bike?  The question arose between pintos and sagarno in the offices of Basque International (this time a bar in Hondarribia).  We discussed the problem of towns in the Basque Country (and elsewhere) clogged by automobile traffic, of the need to use a bike for short distances, even when dressed for an evening outing, or for a business meeting.  To respond to these questions, we needed someone special to help us.  As it happens, there is a professional cyclist and athlete who lives in the Basque Country.  His name is Loic Chetout.  A member of the Cofidis team, he rides effortlessly between a casual ‘hipster attitude’ and a refined class, as he moved into the professional pack of the world tour.

The idea of a photo shoot was greeted with enthusiasm.  The athlete agreed, but we needed to find a setting for a Gentleman Racer.  ‘Let’s go to San Sebastian,’ said Loic.  ‘If I was to live in a town in Spain,’ he said, ‘it would be there.  It has an atmosphere, a way of life, particular, special.  It has class.  It is a town made for bicycles, flat terrain, straight roads, one way streets, a town difficult to access by car, where parking is practically impossible.’

For the shoot, Loic came with his fixed gear bike.  These bikes propelled the two-wheeler to the ranks of highly desired fashion icon objects around 2010,  With neither breaks nor gears, it has only a frame, handlebars, two wheels, and a fixed gear.  Its lines are geometric and pure.  Nothing hinders its pure lines.  This kind of cycle had been imagined by bike messengers in New York during the 1970s, explains Loic.   “They wanted a reliable machine without possible mechanical problems for their work. So, they removed the brakes and the gears.  With one fixed gear, as you pedal, the back wheel pushes the bike, and when you stop pedaling, the back wheel is blocked and the bike brakes.  It’s simple, but one needs a lot of anticipation.”

Whether in the old town of San Sebastian, on the main boulevards or at the beach, Loic Chetout affirms his elegance on the fixie.  But in reality, in the midst of traffic, mufflers, rain, can one truly be a gentleman racer today?  “With a fixed wheel bike, a certain training is required.  But in time and above all, with the development of the electronic bicycle, the cycle has become a form of modern transport adaptable to the city.”

One can still be stylish while cycling around,  it’s easy now that brands have adapted to the trend. Bicycle designs are so diverse that there is one to fit any style. Now even the big fashion brands, designing clothes specially adapted for cycling, are going completely “bicycle crazy”.