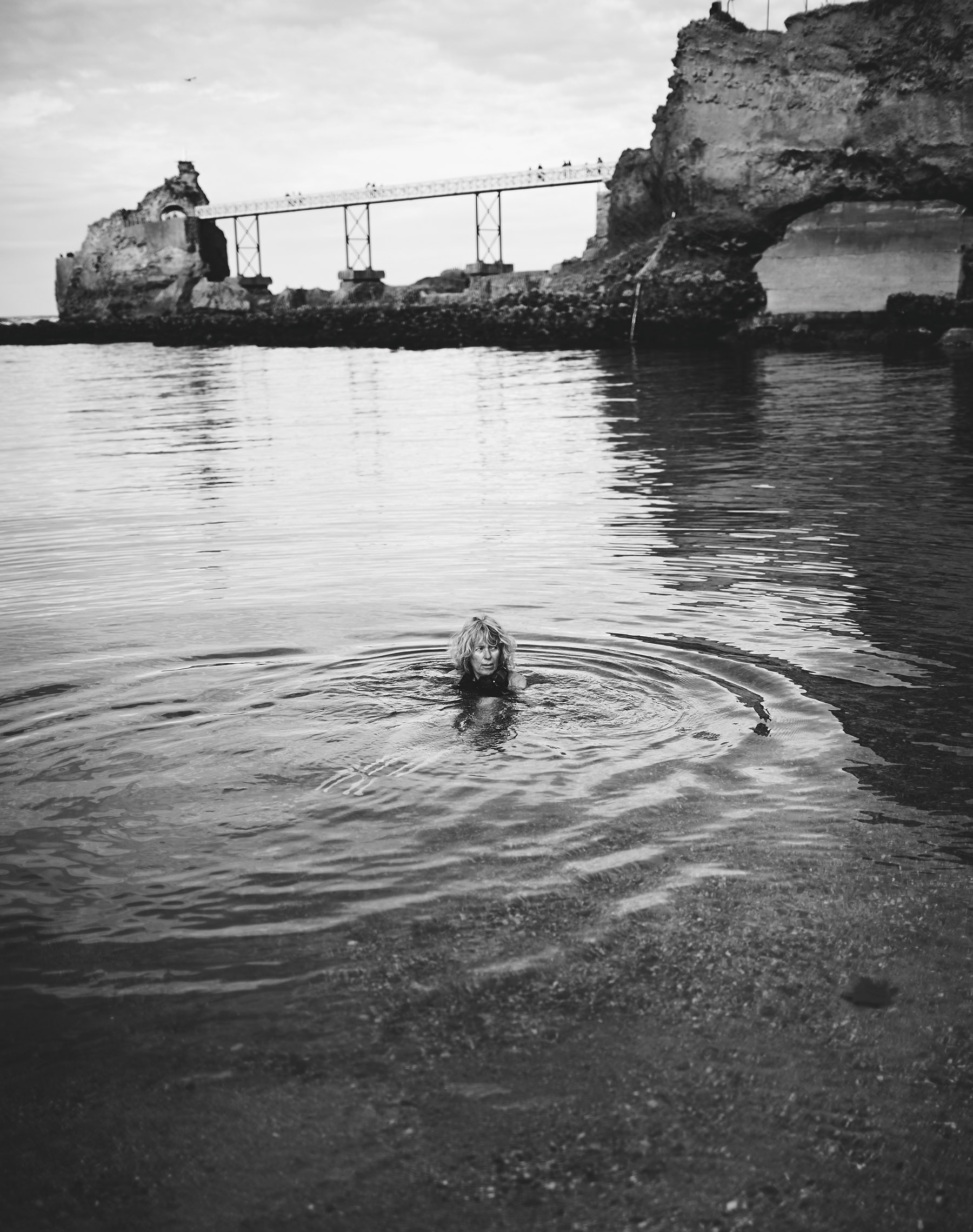 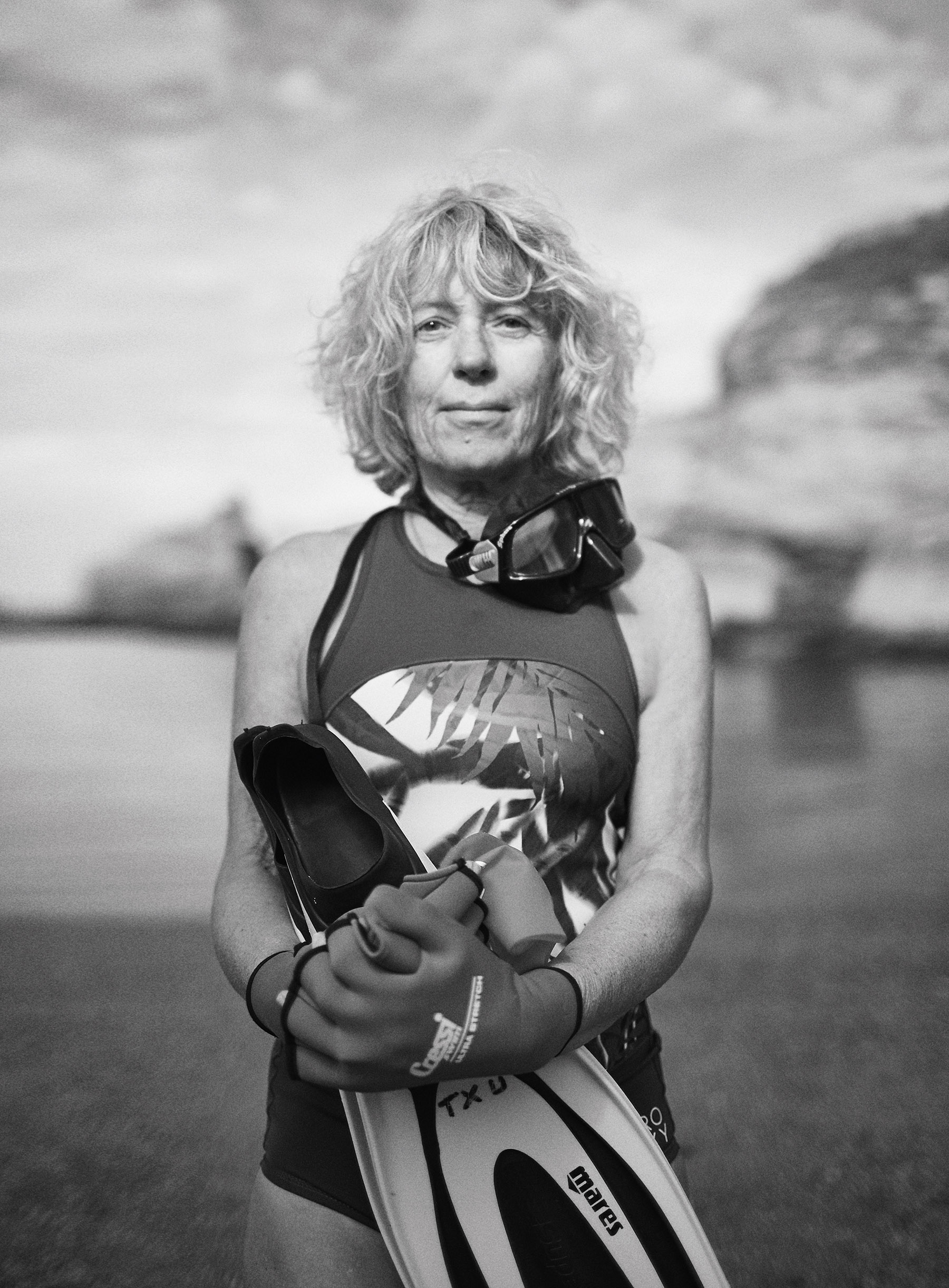 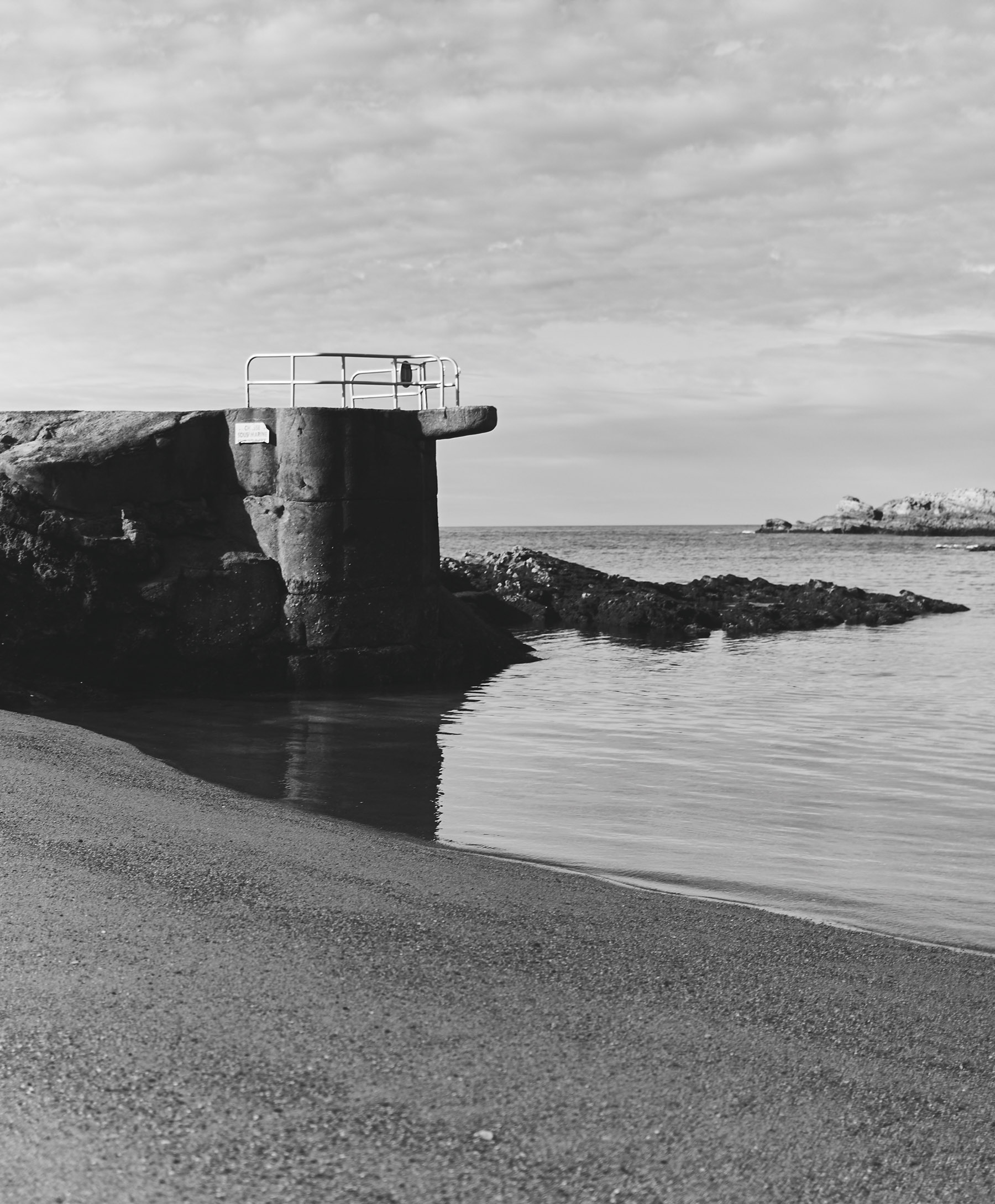 It’s a cold and foggy February morning and the beachside cafes that line
the winding passages around Plage du Port Vieux in Biarritz appear to
silently scoff at the idea of opening. There’s no doubt, it’s low season in
the Basque seaside city. However a closer look at the water in the ancient
harbor reveals a dedicated number of swimmers getting their daily dose
of endorphins.
It’s a growing contingent, and one of them is Maritxu Darrigrand.
The longtime resident is a legend in the action sports world, known
primarily for being the driving force behind Roxy’s marketing vision that
saw the brand rise to a global powerhouse. The 1979 national surfing
champion’s love for the sea hasn’t waned over the years but she has
swapped her board for goggles and fins.

How long do you usually swim for?

MD: In the winter, I usually go for around 15 to 20 minutes. We are a
group of people that belong to a swimming club which is really famous
in Biarritz, it’s called Les Ours Blancs ‘‘the white bears’’. Most people who
belong to the club have to be swimming in winter to be members. So I
usually go at about 12 o’clock and there’s always about 10 or 20 people
swimming at the same time.

Do you swim more often because you’re in a club?

MD: Very much. If I was by myself I probably wouldn’t go, but as soon as
you get to the club there’s always someone going so you feel like going
too. It’s much easier to go with friends around you.
For what is often seen as an individual sport, the group
dynamic is so important for so many people.
MD: True, we have 180 members, there are about 100 people swimming
regularly from age 30 to 85. But the big difference now is that that more
and more people are swimming longer, it is also attracting young people
to the club. What we see now is a lot more people going out further into
the ocean, for much longer, and actually swimming long distances.

Why is that change happening?

MD: It is changing because we got used to swimming longer, we’re
pushing boundaries further every day and we realize we are able to
do it and enjoy it, even when it is cold. Our bodies get more and more
used to cold water, so that we almost forget that it’s cold, it becomes
an addiction. Not only a physical addiction like swimming in a pool and
doing laps; we are enjoying being in the water, looking at the scenery, it
becomes emotional to be part of the elements, the nature, the waves ,
the ocean, it’s a beautiful thing .

I think of ocean swimming as the trail running of swimming.

MD: I’ve been surfing for many years, but now I sort of give up because I’m
getting older and the surf spots are more crowded, I don’t want to fight
for waves. So that’s why I became a swimmer. You don’t need anything,
you don’t need anyone. There’s hardly any equipment and it’s free. I think
once this sport picks up, it’s going to be crazy. We see that with the club,
Les Ours Blancs. We can take about 10 people each year and the waiting
list has been getting bigger and bigger. We don’t know what to do, laughs.

You have a long history of pushing boundaries in sport. What’s
the key to challenging the boundaries of notions around what
swimming can be?

MD: It’s like everything else: it’s time. It wasn’t so long ago that not very
many people could swim. Now you see the demographic shift where
everyone wants to live by the ocean. It’s time now that swimming is going
to develop because it’s natural, it’s nice to be in the water even if it’s cold.
So I think now it is going to pick up, it’s the right moment. Same story
when I brought the first single skis to the Alps, it was the right moment
and people were ready to try something new and later, from single skis to
snowboarding; a great success. If you swim in a swimming pool, then try
the ocean, it’s really hard to go back. The ocean is my natural pool. Even
if I spend less time, I get much more benefit.

What do you look forward to the most about getting into the
water?

MD: I love water, to be in it, to look at it. Just the feeling of the water
on my body. Of course, the feeling is different in winter than summer.
In summer we can do long distance and I enjoy the fact that it becomes
more physical, really swimming and getting into a rhythm, going far and
so on.
What’s cool about swimming in the ocean is that everyday is a different
story. One day there are waves, another day it’s flat, it’s huge, it’s small,
it’s warm, it’s cold. The pleasure of understanding the ocean is something
else I enjoy, being within the ocean, within nature.
Because I’m a surfer and I understand the waves, I love the adrenaline of
going into waves.

MD: I love bodysurfing. You don’t need anything and you go.

Do you see crossover between surfing and swimming?

MD: Basically I do swimming 4 times per week, yoga 2 times per week,
and some hiking in the mountains and I feel more fit than ever. If I start
surfing again, I wont have any pain. Before when I would surf, I would be
sore and tired. Physically I feel very strong and I’m not so young.

What are your early memories of the ocean?

MD: Being a kid and growing up in Africa I would spend hours in the shore
break until I was to tired to move. I also remember swimming in Cote des
Basques, when there were no waves, my first swim to the rocks out there
in the ocean., that was great. In Tahiti, it’s more about snorkelling and
looking down. The ocean is totally alive underneath you and it’s a great
feeling to be surrounded by fish, as long as they’re not too big!