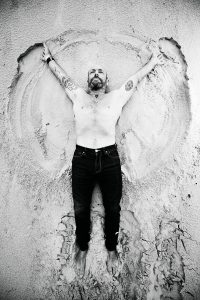 Do you remember the first time you held a camera?

TC: I remember looking through the lens — and the first time I framed and focused on a subject I thought, ‘this is awesome.’ It felt really natural for me. Not many surfers carried cameras back then. You had the surf photographers and then you had the surfers. Once I started carrying a camera, I couldn’t put it down. So I brought it everywhere on tour. I wanted to record what was going on around me more than anything. It also helped me escape the hustle and bustle of my life. To look through the lens and see the world from another view — that played a big role.

Was there a temptation to turn your lens toward the lineup?

TC: I wasn’t focusing on surfing when it came to photography. I was more looking at the places and people — the environment around me. I’ve got boxes and boxes of slides here. I was competing, on the tour treadmill, for 14 years — all years of film. I first started using digital around 2001.

How do you select images for an exhibition?

TC: I’ve got thousands of photos — that’s the trickiest part now, sorting through them. I dread going into the archives because I dive in and I disappear. There’s a lot of emotion that comes up. I sort of need to take a deep breath before I go in because I feel like I’m going beneath the water. I had help curating my last exhibition because I’m just too close to the images. I don’t know what’s good or bad. I would love to put a book together someday. I’ve currently got an exhibition that’s showing in France — there are images from around the world: Australia, Japan, California, France, South Africa and Bali.

TC:  With digital, you can be almost over prolific. Way over the top. But when I see light coming from a lovely angle onto a shape, or it’s coming through something, I feel inspired. People’s faces also capture me. I like working with available light. Creating artificial light hasn’t really interested me. I’m always working with what’s flowing in — there are tiny gaps of time where the light hits at just the right angle. I think that’s cool.

Do you still shoot film?

TC: I haven’t shot with film in a year or so but I’ll come back to it. Film has a special place. It gives us that critical moment to capture a scene. Digital really overwhelms us and we may not get to the heart of what’s happening. It overwhelms us. We desensitize ourselves to the natural world. If we consistently shoot stuff over and over again — that’s for me I should say!

How did bringing your camera on tour help your surfing?

TC: Having a camera on tour was a great distraction. I needed to do something else. I was pretty single-minded and competing is super absorbing. Something was telling me that wasn’t all that I was — the photography was sort of a way of getting another view of that part of me. Now I realize that’s what was really going on. At the time, I was trying to see the world in another way. It was a natural thing for me to do: grab a camera and walk off away from the contest. It got me interested in what was going on away from surfing.

Were there surf photographers you learned from along the way?

TC: Jeff Hornbaker is someone I learned a lot from. We used to travel together a lot on Quiksilver trips and I used to steal his film. I would watch him and how he framed things up and used lenses. He actually really cared for his gear too.

I think having a relationship with them helped because I understood what they were trying to do to get the shot and their mindset. It probably helped in a number of different ways.

What area of photography are you working on now?

TC: I’m not super technical but I may want to improve some of those skills. I don’t like to mess with the photo a ton after I’ve taken it. I like to get it right when I’m looking through the lens. I’m currently shooting on a Canon DSLR with a 50mm lens — a really fast one like a 1.2. I love that setup. I try to keep it simple — full manual and manual focus most of the time. I love a prime lens.

You’ve traveled around the world via surfing. Where would you like to go next?